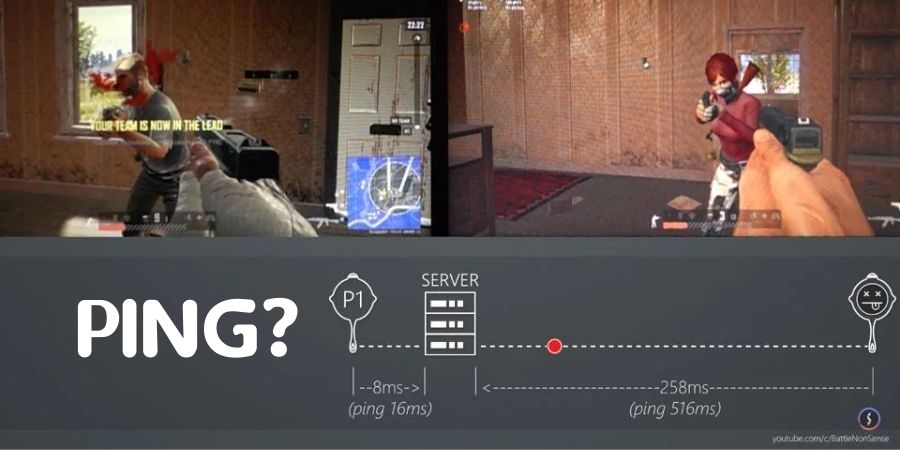 “What does a high ping mean in online gaming?” That’s the question that many of us can’t help but ask. After all, it is one thing to get interrupted every so often while playing the game you love.

It is quite another when there are constant random delays affecting your gameplay at every turn.

That would definitely ruin the gaming experience, wouldn’t it?

First of all, let’s start by understanding what a ping is. The word “ping” was popularized back in the day when players used to play multiplayer games through dial-up connections instead of broadband internet.

Remember those annoying sounds that your phone would make when you dial a number? That sound is called a “ping”. In online gaming, the term “ping” refers to the time that it takes for data to be transmitted from your computer to a given server and back.

Most servers have an in-game feature which allows you to check your ping when playing on them.

So what does a high ping mean in online gaming? A high ping means that you’re going to have a seriously difficult time playing the game. This is because a higher ping indicates that it takes longer for your computer to communicate with the server than other players who reside closer to said server. As such, they will get to take their turns faster than you and be able to react faster.

If you have a high ping, then you will experience the following problems more frequently:

1) Delayed Reactions In-Game – A high ping means that your computer is sending and receiving data from the server at a much slower pace than other players on said server. As such, they will get to take their turns faster and will be able to react faster than you, meaning that it is easier for them to kill you.

2) Rubberbanding – Rubberbanding happens when your character appears to move in one direction but then comes back immediately after. This usually happens when you are trying to run away from another player or a monster, but due to high ping the game registers that you are moving even though you’re not.

3) Delayed Commands – Sometimes, when playing an online game, your actions or commands to your character do not go through right away. This happens because the server has to process your command first before sending it over to the other players on said server. Since they have lower pings, they will get to act before you do.

4) Delayed Gameplay – This happens when there are too many players on the server and your computer is not able to process commands quickly enough for them to be executed before others take their turns. What ends up happening is that there are delays every time it’s your turn, which can make the game quite frustrating to play.

What Can You Do?

The first thing you can do is check your ping before playing on a server so that you know whether or not it will impede your gameplay. There are many websites out there which allow you to check your ping, such as this one . If the server has too high of a ping, then you should choose another server that has a lower ping.

Alternatively, you can always play on single-player or LAN servers instead of playing online with others so that there are no other players around except yourself. This will not solve the problem entirely but at least it’s an option if you can’t find any low-ping servers to play on.

In the end, a high ping is a serious problem that affects many gamers playing online games. If you have a high ping and are constantly experiencing rubberbanding or delayed gameplay, then maybe it’s time to switch servers or just play single-player instead. You might lose out on some bragging rights for being top of your friends list but you will at least be able to enjoy the game without lag or rubberbanding ruining your experience.

What is a good ping speed

A good ping speed for online gaming is about 10ms-15ms. Players who have a ping above 50ms can experience a significant latency in online games which may result in a bad gameplay experience.

The following are the common symptoms of high ping:

Pings can be measured by using the ping tool on any computer. The following are the steps to run a ping command:

2. Type “ping” followed by the IP address of the target site.

3. More than one IP address can be used in a ping command by using more than one space between each IP address and pressing enter after every IP is entered. To run multiple pings simultaneously, type “ping” once and separate the different addresses with a space.

Note: Ping times are not accurate as it depends on the time it takes to make a roundtrip from your computer to the target site.

Why is my ping so high but my internet is good?

To know the reason behind high ping with google internet speed read this article> reasons for the lag in online and offline games.

How to fix Sims 4 Simulation Lag?

9 Most Playable League of Legends Roles