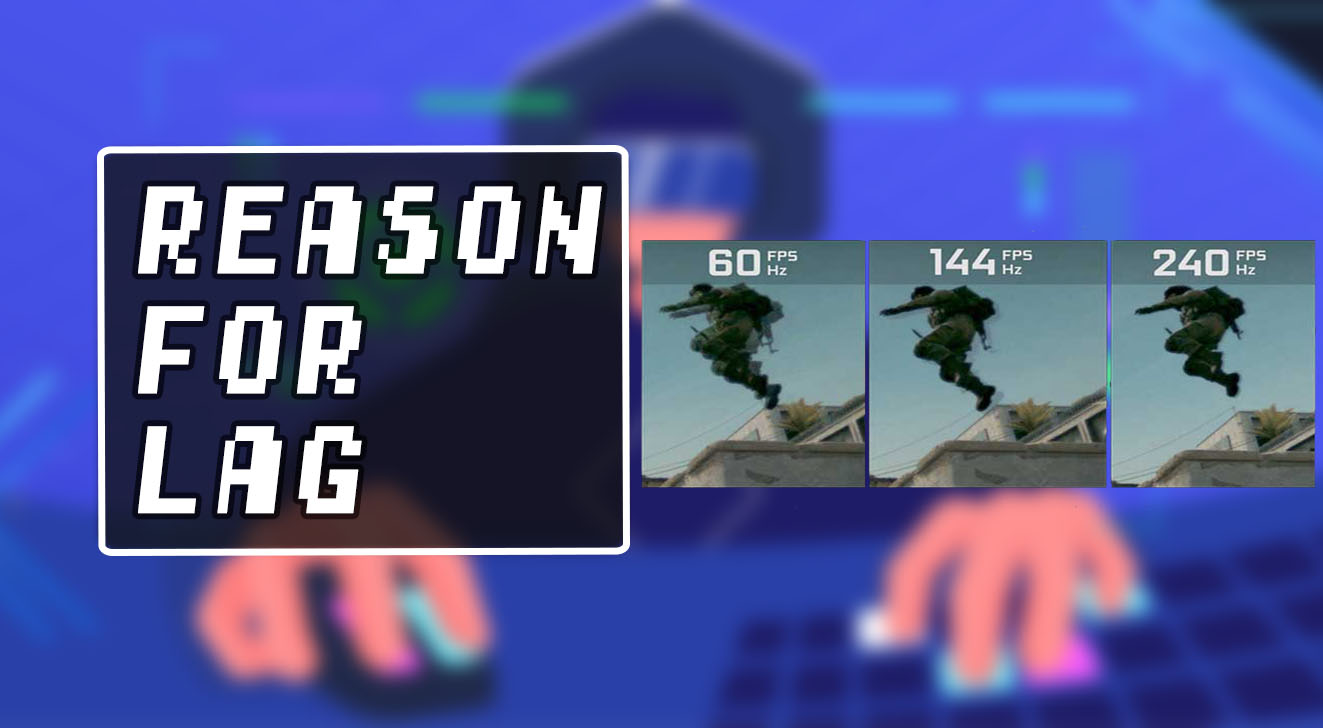 Lag is troublesome, and when it happens while gaming be it offline or online, lag is just more than frustrating!

There are two major reasons for lag in video games: Reason 1 for lag is when your PC hardware is outdated! This causes system latency, another reason is a slow Internet connection that causes network latency or what we commonly call high ping in online games.

Some other factors responsible for lag are poor server processing power, low bandwidth, or packet loss. So, what should you do to fix it?

Thinking about updating your hardware or Internet connection?

Not so soon my friend, there’s a lot to know about lag before you lose your bucks in a hurry!

Here’s what I have for you in a nutshell

In this blog you’ll learn:

Before being too techie let’s discuss lag in simple language.

The lag in online and offline video game is a noticeable delay (in technical language we call it latency) between the players’ action(action means when you click fire button) and the response of the server supporting the game, which Must be sent back to the client (your computer or software that accesses the services)

Above diagram shows how delay in arriving data packets is the main cause for lag.

Now, you can get confused with terms like Lag, latency and ping, then here is a detailed guide.

Just stick with me to understand lag better,

The lag may not only be due to network latency, but your hardware plays an equal and important role.

Once you know the reason behind the lag, you can easily come up with the right solution to fix it. Whether it is to upgrade hardware or change internet providers etc.

To understand lag better, it is necessary that you know all the details about latency and its types because lag is caused by high ping (latency is measured in ping so high ping means high latency means no lag and vice versa).

What latency is good

The recommended latency for professional gaming is between 10ms to 40ms, but you typically may get latency between 60ms to 110ms which is also an acceptable range. More than this is not good at all!

Latency is an important concept to know, once you understand it properly you’ll know the reasons for lag and what you should do to avoid it.

You can watch the above video If you don’t like to read text.

This is also referred to as click-to-display or end-to-end system latency. In system latency, the server is not responsible for any type of delay, only your peripherals, display are involved.

This delay impacts gameplay in a number of different ways. Here are a few examples:

– The peripheral (such as a mouse, keyboard), the PC, and the display. When you click any button or give any input that data gets stored in temporary memory in a buffer stream and data goes to the processor, processes it and then sends it out via output channels accordingly. Delay in processing or time taken by data to process contributes to system latency.

That is why it is always recommended to use wired products while playing games. The only reason is, it increases latency.

Let’s take a moment to dive one level deeper and define some terms that are more accurate than “Input lag”:

These are high level definitions that gloss over some of the details, though they do give us a great foundation to communicate about latency effectively. We will also go into more detail about each of the stages later in the article.

Skip ahead to the advanced section to dig deeper!

Network latency is the round trip delay between the game client and the multiplayer server – more commonly known as “ping”.

This term has been discussed numerous times before, but here it is in detail! This delay can affect our gameplay in a few different ways depending on how the game’s networking code handles network latency.

The first thing we have to talk about exactly is how online games work.  For now, we need not go into the details!

There’s a few different types of ways that we can send data back and forth while gaming.

First is the client server where there’s a central server and all of the people playing the games connect to that Central server.

That’s where everybody connects to everybody often!

There is a central server peer.

There’s definitely nuance between these two things, but keep in mind these are the general forms that online gaming takes in its transmission of information.

So let’s say instead of using a centralized server meaning some computer in some data center somewhere, we’re using the more peer-to-peer approach and one of our peers is acting as the central server whatever weaknesses that particular connection has we will all deal with.

For example, somebody starts up a game on a Wi-Fi connection in a remote area where internet speed is very slow compared to the city or urban area.

Everywhere else, every other player in the game may have much better connections but all of their data goes to that person in the remote area and comes back from that particular person.

The same dynamics apply to a computer sitting in a data center hosting a game somewhere.

optimized by professionals where I could host a game on my own personal laptop in my basement again.

That is hosted on a professional setup and maintained server will essentially all of the time be connected through Ethernet cords and actual physical wires containing computers that are specifically built for the kind of workload.

The game need not usually not be terribly heavy! It’s usually just the transmission of information but sometimes there are calculations and that’s actually another place where lag may come from.

If the game does offload any calculations to the server and the server ends up having to do too much of it, we all know what that is like a computer just gets too much going on and therefore it slows down for a minute until it finishes.

All of it that will affect every player connected to it.

Let’s say we’re using a server that is a hundred percent works just fine. Great set up, doesn’t have any of these issues and has a great connection with all information.

Let’s say we’ve got two players that have varying connections! This is another place where we can see lag form.

Let’s say they both shot a bullet at each other’s head! Perfect headshot- noscope, whatever and let’s consider the idea that there is some degree of latency no matter what a few milliseconds.

It’s just the nature of data transmission, It’s not possible to have no latency.

It is very possible to have very minimal latency but I assume one of these players has a 5 millisecond latency and the other has a 10 and on both screens.

Players with 10ms latency shoot first but get killed due to millisecond latency. Players with 5 ping took less time to send the data.

This was an example of lag that happens between players through a server.

Somebody saw something happened that didn’t end up happening! This is usually a source of frustration but there’s not a lot of ways to actually get around this just because of the nature of data transmission.

That’s about as far as we’re ever going to get and really the best to hope for is that the server Works to sort it out to make sure that there is some layer of consistency.

Here is an Overview of Problems that players face due to lag or latency.

Why Video Games Can be Addictive? Top 8 Symptoms & Prevention

How to Detox Your Child from Video Games-Healthy Gaming Guide